State auditors have completed their audit of the Harrisburg School District, where they found more than $5 million in potentially questionable costs over three years, including overpayments to employees, contracted vendors and the superintendent, among other problems.

The audit documented $2.6 million in “potential questioned costs,” and an additional $2.5 million in unsupported expenditures.

The report confirmed 132 terminated employees were getting free continuous health benefits, which is more than double the amount previously thought and represented a loss of more than $800,000.

The district also potentially paid more than $900,000 to substitute service agencies for work that wasn’t performed.

“Our engagement identified significant deficiencies in internal control, instances of financial waste and abuse, noncompliance with relevant requirements and a lack of effective leadership,” auditors wrote.

Auditors noted that two of the most helpful employees during the audit were removed from the district in the middle of the audit. One employee was placed on paid leave and the other saw her contract abruptly terminated, which prevented further cooperation with auditors.

School district leaders originally refused to cooperate with the audit, refusing access to the district’s eFinance system, which turned up support by the city’s mayor and local legislators for a state takeover.

Although school officials eventually provided access to the district’s electronic finance system, the auditors noted upon completion of their audit that they still had not received all of the information they requested about a federally-funded program at the high school known as the Blended Transition Academy.

More: New leadership team in place at Harrisburg School District: Who are they?

The scathing audit by Wessel & Company focused much of its attention on the district’s business office, which failed in its oversight and was responsible for $2.5 million in “known questioned costs,” according to the audit.

The district had no chief financial officer or business manager so Acting Business Manager Bilal Hasan had been running the business office since 2017. But Hasan does “not have the degree or the knowledge necessary to perform the Acting Business Manager role,” the audit said, and in fact, his transcript showed he had taken only two entry-level accounting courses and had zero continuing or professional education classes.

The district even changed the job description when advertising to remove higher qualifications that Hasan clearly did not meet, the audit said.

Meanwhile, former Superintendent Sybil Knight-Burney was one of dozens of employees or former employees who were overpaid, according to the audit. The business office made several mistakes while calculating Knight-Burney’s annual raises, resulting in overpayments totaling nearly $20,000 since 2014.

The school board also failed in its annual evaluations of Knight-Burney, according to the audit, by giving her “exemplary” ratings in the face of “cumulative below average student test scores, decreased student enrollment, increased enrollment at charter schools, significant financial deficient operations and turnover and vacancies in key management positions.”

The district also overpaid at least 16 vendors more than $210,000 more than their board-approved contracts, auditors found after pulling a sample of 47 contracts.

In addition to overpayment of contracts, auditors also noted: 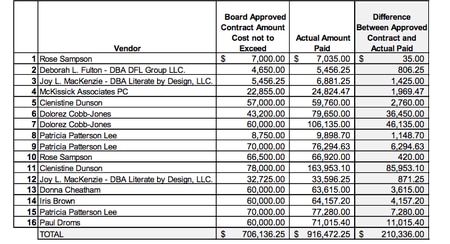 Employees who worked at the Blended Transition Academy also were paid a total of $26,000 more than their contracted amounts, according to the audit.

Problems with documentation of the academy prompted state education officials to yank federal funding from the project earlier this year. Barbara Hasan, a retired assistant superintendent under Knight-Burney, had been running the program. Knight-Burney then moved Barbara Hasan to the principal’s job at the high school, where she was paid $377 per day through the Substitute Teacher Services company. With the company’s 25-percent markup, the district was paying $471 per day.

The district had an over-reliance on contractors, according to the audit, including bringing back the retired Human Resources Director Lance Freeman and keeping him on contract where he was paid more than $317,000 over the past three years for working about three days a week.

The district paid even more than that amount because the district had to pay Substitute Teacher Services a “markup” of 19 percent, which inflated the district’s cost for Freeman to more than $378,000 over three years.

“This worker does not report to school management on a regular basis, nor does management oversee the tasks performed by this contracted worker,” the audit said. “We noted that the costs paid for this worker is significantly high for the amount of services he provided over a three year period.”

The district also may have overpaid Substitute Teacher Services and another company known as Abel more than $900,000 because the mandatory daily sign-in sheets at school buildings to prove the workers showed up did not match invoices submitted by the companies.

“Both vendors provide the district with a detailed weekly invoice for substitute staffing services provided,” the audit said. “However, there are no review and verification controls in place to ensure that the substitute was in attendance to fill-in while a district employee was absent.”

The audit also confirmed 51 employees were hired at the wrong “step” level, which rewards teachers for years of experience. Of employees who filed grievances: 10 employees were overpaid; and nine were underpaid, the audit concluded.

The auditors identified at least 32 additional employees who were being overpaid at a likely cost of $100,000 annually.

“In addition to the overpayment of wages,” the audit said, “the District is also paying additional federal taxes and additional retirement contributions to PSERS which only further increases the District’s questioned costs related to this error.”

The district also overpaid its transportation costs at nearly $40,000.

“The District has a significant deficiency in its internal controls over the review and approval process of transportation invoices,” the audit said. “This is due in part to turnover as the former Transportation Supervisor was terminated in November 2017 (for embezzlement) and that position remained vacant until December of 2018.”

In addition, employees in the business office were not adequately reviewing invoices, resulting in errors that weren’t discovered.

Employees also got “travel advances,” through the business office at least three times without providing any documentation, the audit said. Bilal Hasan was one of the employees who was reimbursed $1,300 for travel in 2015 without having to provide any receipts.

In reviewing 60 random personnel files, auditors found 51 of them did not have a job description; 52 did not document a college degree or transcript; 18 were missing FBI clearances and 10 were missing child abuse clearances.

All of these deficiencies were occurring amid a backdrop where the district’s tax collection rate fell to 80 percent, its fund balance shrank to $11 million (from $30 million) and the cash-flow situation is at a danger point, the audit said.

Overall, the district has had a history of inadequate “Tone at the Top” and poor ethical values, the audit said.

“The School Board fails to effectively convey expectations regarding their adherence to standards when they “rubber stamp” the approval of contracts and/or new hires,” the audit said, noting particularly the hiring of James Ellison as in-house solicitor. “The Board of Directors are unable to provide impartial oversight of Senior Management when they allow relatives to work with or under Senior Management. Harrisburg City School District does not provide employees with anonymous channels to report concerns, or provide information regarding waste, abuse or irregularities.”

The audit was completed prior to the state takeover June 17 that put a receiver in charge of district operations.

The receiver terminated the services of 14 employees, including the superintendent, in-house solicitor and acting business manager. In their place, the Montgomery County Intermediate Unit will perform nearly all central administration functions for the next three years.

The team began its work Monday and discovered several missing computers from the business office that contained key financial documents that weren’t backed up to internal servers.

Editor’s Note: This article was updated to correct that Barbara Hasan’s pay was per day, not per hour.