Devoe was headed to a fire on the 2500 block of Lexington Street when an impaired driver ran a stop sign and T-boned him. 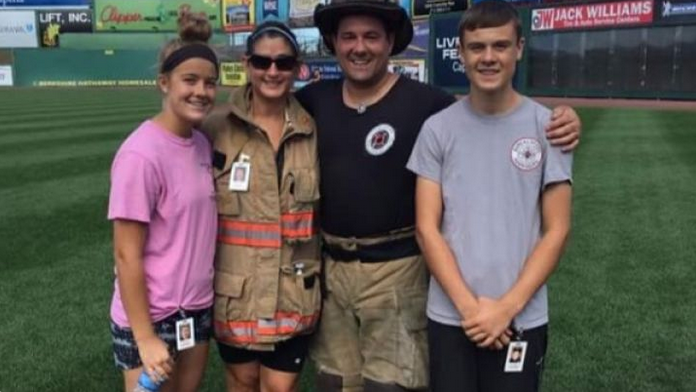 Devoe was killed in a crash while
responding to a fire

The National Fallen Firefighters Foundation is providing full rides to college for two children of a Harrisburg firefighter killed in the line of duty almost four years ago.

Aliza and Carson Devoe were granted the funding in light of the death of their father, Lt. Dennis Devoe, who died on the way to a March 2017 house fire caused by a hoverboard.

Devoe was headed to a fire on the 2500 block of Lexington Street when an impaired driver ran a stop sign and T-boned him at 14th and Market streets, police said. Two girls died in the fire.

A 19-year-old woman driving a stolen vehicle under the influence caused the crash that killed Devoe, and was later sentenced to prison.

“Denny was a perfectionist at everything he did,” said his wife, Amy Devoe. “He was a great father. He was very involved with our kids.”

Dennis Devoe’s daughter Aliza Devoe was 14 when he died.

“My dad was a family man. He loved camping and going to the beach,” she said.

“He was courageous. He loved what he did,” added Carson Devoe, the lieutenant’s eldest son.

“We couldn’t believe it, we were in shock. It was like a dream come true,” Carson said of the scholarship news.

“I can focus more on studying and having friends and just living the college experience without stressing about the financial part of it,” Aliza said.

Dennis Devoe — who served as a firefighter for 21 years — was honored in a national memorial service in 2018.

“It’s obviously so hard and we face these really tough challenges every day,” Aliza Devoe said. “We will get through this — our future is bright for all of us.”