Some hard-core craft beer lovers just didn’t see the point. Why was this trio of beer-brewing partners from Harrisburg so insistent on opening what they believe will be Pennsylvania’s first Black-owned microbrewery?

Shockingly, their dreams were dismissed with a shrug of the shoulders from craft fans, who believe the beer is the thing. What does the skin-color of the brewers have to do with it?, the skeptics scoffed.

“Why does it matter if we’re the first Black-owned brewery?” said Harris Family Brewery partner Timothy White Jr., while standing in the converted warehouse building on Harrisburg’s Allison Hill that will become the brewery.

“That’s the question we were getting,” he said. “It’s kind of like when we say, ‘Black Lives Matter,’ and people go, ‘all lives matter.’ It’s that thing, and it’s bad. That’s racism at its core right there. Representation matters. Every industry, we’ve had to fight to represent ourselves.”

In fact, the very mission of the Harris Family Brewery is bringing people of color into the craft brewery movement.

“The craft beer industry knows it has a diversity issue,” White said. “They’re trying to figure out how to get more people of color into their breweries to drink their beer. Nobody ever thought, ‘Hey, why don’t we have someone of color make it?’”

Since many Black people have been slow to come to craft beer, the Harris Family Brewery partners plan to bring beers specially brewed to appeal to Black drinkers right to inner-city bars. It’s no accident their brewery and planned tasting room is opening at 300 S. 18th St., smack in the middle of Allison Hill, long the city’s African-American cultural center.

“How do you bridge the gap between people of color and craft beer? Why don’t more Black people drink craft beer? That’s a simple question,” White mused. “The answer is, it was never sold to us. It was never marketed to us. I want to adapt our recipes to what works for our community.”

Not since Billy Dee Williams sipped Colt 45 has there been such a direct outreach to Black drinkers as what brew master Shaun Harris says he and his partners are planning.

“I understand that I have to sell a beer to Miss Betty up the street, or someone down the street who only ever drank Colt 45 or Coors Light,” Harris said. “It’s going to be hard to snatch that Coors Light out of their hand. We have to get them to try it.”

Harris said he’s already working on special brews that will ease that taste transition. One is what he calls an easy-drinking lager with the working title, “Street Dreams.” The name and its custom-designed urban logo perfectly reflect the brewery project, itself.

Harris toyed with a home brewing kit after tasting a Blue Moon nearly a decade ago now. It was the closest he got to craft beer — and he liked it. Now, he wanted to go further. Much further.

The venture became a business when Harris brought his beers to a family picnic and invited Tim White to give his concoctions a taste. White, whose wife and Harris’s spouse, Patrice Walker-Harris, are friends, didn’t just taste the beer. He and Harris swilled the entire supply.

“Day One of me drinking his home-brew, I said, ‘Yeah, we need to sell this’,” White said.

That was 2014. Ever since, it’s been a six-year-and-counting slog to plan, locate, finance and open the brewery. Entrepreneurism actually comes naturally — and by necessity — to many who grow up in the inner-city, Harris and White say. What doesn’t come so naturally is mentors, angel investors and experienced businesspeople willing to walk newbies through all the start-up minefields.

“Where we come from, everything is a hustle,” Harris explained. “You can’t afford to have a hobby. Nothing’s a hobby. When you grow up in the hood, everything’s an opportunity. As soon as you learn something, the next thing you learn is how to make money off of it. That’s from some dudes who grew up and sometimes the only thing I ate was the school breakfast. So everything I do is, how do I monetize this?”

It hasn’t been easy. But White never expected it to be this hard.

Asked what it’s taken to get to this point, about three- to four-months from their planned opening, White chuckles somewhat uncomfortably, then says, “Everything I have.”

“We worked really hard to get here, and it shouldn’t have been this hard,” he said.

There’ve been plenty of false starts. An early Kickstarter campaign fizzled. They’re on their third location. But the pieces are finally coming together. So is the funding

“It’s a very expensive game to get into,” White said of the micro-brewery business. “There’s no such thing as grants for this type of work. Most people who started breweries, that I’ve heard of, started with family loans.”

Instead, White, Harris and third partner and brewer, Jerry Thomas, continued to toil at their day jobs, slowly sinking money into the brewery project as they went along. A more recent GoFundMe effort, combined with White’s social-media savvy and direct appeals on the likes of Facebook Live, finally pushed them over the top. They blew through an early $15,000 goal, upped it again, hit $30,000 and now have a target of $60,000.

They used some of the cash to acquire all the brewing equipment they need to roll out their first barrel later this year. That’s because the partners say they are now in a race to become that first Black-owned brewery in Pa., as at least two other minority brewers are planning openings in Philadelphia.

Harris Family Brewery will start very modestly by Yuengling standards, brewing just four barrels a week. The partners hope to be cooking up nearly 10 barrels a day in no time, however.

Getting their craft beer into the hands of people of color will be a drinker-by-beer-drinker proposition. The partners plan to can, bottle and keg their beer, then supply the restaurants and watering holes on Allison Hill as their primary market.

They will stage “tap takeovers” at Black bars and other locations. If those bars lack tap systems, they’ll truck in cans and bottles. Anything to get this untapped craft beer market segment to sample their Black-brewed beers.

In addition to Street Dreams Lager, other early offerings will be Formula 58 Honey Wheat, Bando Black Stout, and What the Rock Was Cooking IPA.

Ironically, the three have drawn the most support from the competition — other craft brewers who the partners say have been unfailingly generous with advice, time and comparing recipes.

That’s because the brewery owners recognize the industry’s diversity problem, too, White and Harris say.

“The professional brewers in central Pennsylvania have always welcomed us with open arms, given us anything we needed and guided us along the path,” Harris said. “It was the customer base which was kind of abrasive to us in the beginning.” 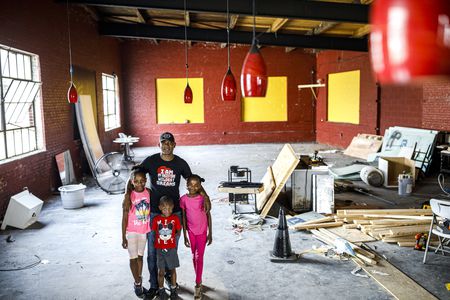 Perhaps, that’s because it’s been a largely segregated market up until now. If church is America’s most segregated hour, craft breweries could be a close second. The three partners often spend time at other breweries across the state, saying they see far too few people who look like them there. Sometimes, they’ll even take bets on how many Black faces will come in that night. Whoever has the under usually wins.

This is why their Black-owned brewery matters, they say. It will change the beer, the marketing, the customer base – and just maybe, the industry, itself, they say.

“There’s nobody like us who’s brewing beer, at least not in Pennsylvania, specifically not in the inner cities,” White said. “Representation is the answer to that. We’re there, and our friends will come; our families will come.”

In fact, they believe that if they brew it, the entire community will come.