Diners at the Jackson House cafe ducked for cover Thursday at the sound of bricks clattering onto the roof from the old hotel next door.

“A lot of people were in here,” said owner David Kegris, “and you hear all this — brrr, brrr, brrr — and everybody just ran.”

Kegris inherited the cafe in 1993 via a will his friend, Black hotelier German Jackson, wrote on the back of a grocery list. That holographic will set off a lengthy legal battle for the old rooming house, which catered to Black entertainers like Cab Calloway in an era when they could perform but couldn’t sleep at the establishments downtown.

Over the last two decades, the historic Jackson House repeatedly changed hands with each new owner promising to restore it only to have those ambitions foiled.

The building’s two turrets were the most recent to go as the latest developer — Matt Long, in partnership with Philadelphia Eagles football player LeSean McCoy — pursues a plan to convert the building into apartments with commercial space on the ground floor.

Long, the fourth owner in five years, said he’s had to contend with a series of legal and logistical hurdles that delayed those plans. Now, he’s trying to demolish significant portions of the building without triggering a cascade of debris onto the cafe or the street below.

A picture that accompanied a newspaper column German Jackson wrote circa 1952. “To start out each morning with a smile and a kindly feeling toward everyone regardless of race or creed and with the privilege of working hard,” he wrote, “this to me is America’s precious freedom of opportunity.”

Crews are working from a lift, he said, to remove what’s left of the front turret and the roof, which collapsed years ago.

“(The front turret) was leaning backward a 15 degree angle, separating from the building,” Long said. “My guys have to get in and work under there.”

Long said the incident Thursday was the result of a bucket of bricks falling from the lift onto plywood sheeting below and not — as Kegris believes — from a collapse triggered by the workers.

Regardless of whether the building is collapsing or being demolished — with the building in such poor condition, this could be a distinction without much difference — the incident raised serious safety concerns.

Mayor Eric Papenfuse said Friday that code enforcement officials were dispatched to the scene on both Thursday and Friday. Demolition was allowed to continue, he said, after Long’s crews agreed to more restrictions on when and how they proceed, as well as additional safety measures.

“We’re making sure the business isn’t harmed and people aren’t hurt, and the construction’s being done properly,” Papenfuse said. “There were legitimate concerns raised and I believe they’ve been addressed.”

He added, noting that a code enforcement official was dispatched after PennLive’s inquiry: “If more bricks fall, give me a call.”

Onlookers should expect a lot more bricks to come down, hopefully in a less dramatic fashion.

Long said the state of the building is such that the vast majority of it will need to be demolished, leaving only the facade and the north wall with its 2017 mural. Everything else will be constructed anew, with the brick facade being supported by scaffolding as work continues.

“We have the background in this,” he said, noting his work on a dilapidated North Street building that now houses Elementary Coffee. “We save historic buildings.”

READ MORE: Black entertainers found a home at the Jackson House after being barred from other hotels

It’s unclear how long demolition will take or how much it will cost, Long said, given the complexity of the work and ongoing issues with utilities. Once that phase is complete, he said the reconstruction project is estimated to cost upward of $540,000 and will take about a year to complete. He’s already spent about $50,000 on engineering and planning.

Many neighbors, on Facebook and out in the world, remain skeptical given the Jackson House’s long history of failed redevelopment.

One of them, Ted Hanson, witnessed the building’s slow decay from his bedroom window. In the early ‘90s, he tried to buy it himself, intending to transform it into a bed-and-breakfast. Since his efforts were foiled, he’s watched with frustration as each successive plan failed.

For a time, the now-deceased Mayor Stephen Reed pursued wanted to turn the entire block into an African-American heritage museum, a costly endeavor that never made it past the planning stage.

All the while, the Jackson House fell further into disrepair.

“How many years were lost, just lost,” Hanson said. “That building was stripped of all of its architectural elements, right down to the spindles from the front stairs and even the front doors of the building.” 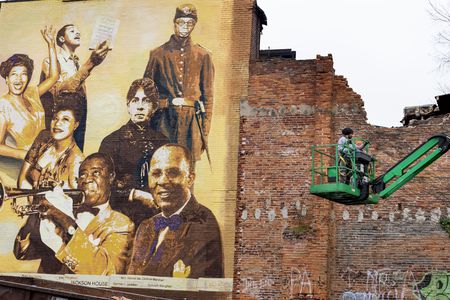 Workers address the roof and part of the walls on the Jackson House, a four-story, circa 1884 red-brick building at 1006 N. Sixth St. in Harrisburg, which have fallen in. The historic property housed prominent African-American guests during segregation.
Joe Hermitt | jhermitt@pennlive.com

Hanson said he routinely sat in the house listening to German Jackson’s stories of Harrisburg from the ‘30s, ‘40s and onward. He shoveled Jackson’s walk each time it snowed and invited him to holiday dinners.

“He was one of the most gracious and articulate people I have ever met,” he said. “Age had not dimmed his intelligence or wit. He was just charming; exactly what you’d expect from someone who worked in the hospitality industry since the ’20s.”

Now, Hanson mourns his friend all over again as the last physical reminder of his place in Harrisburg history teeters on the brink.

“I am angry,” he said. “I am terribly angry at how many people (expletive deleted) this up.” 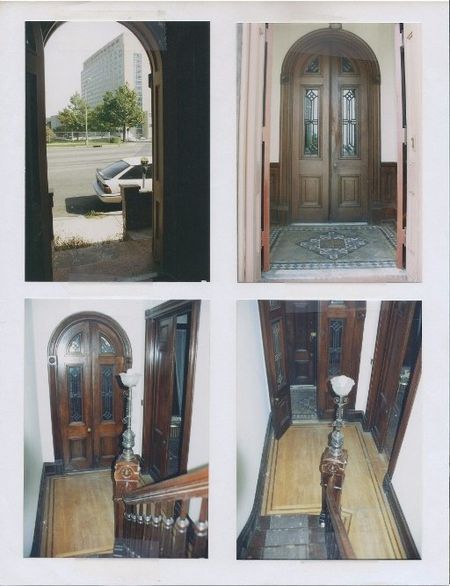 The front entryway of the Jackson House, as it appeared in the late ’80s and early ’90s.

Read the ‘The hunt for Ray Gricar.’

Andrew Seidman: 2020 was an unsightly 12 months in Harrisburg. Do not anticipate 2021 to be a lot better. – LancasterOnline